Posted by RetroCoders at 05:01 No comments:

Finding the relative position of a point to a players orientation...

So for many things in a 3D game we need to convert the Relative Offset position of one object to another based on how one of the objects would see the other one!!!

You can see that the X and Y relative coordinates have changed based on which direction Player 1 is facing.

The best way to think of this is light a Radar on a vehicle (in our case a Submarine).  The dots on the radar are Always Relative to the Orientation of the vehicle.

Why?
Why do we care about this?

Well it turns out that (apart from having a Radar) it is a lot easier to check for collision between 2 objects by using simple Point within a Box Area check, than for checking if a single point is Anywhere Within a Box Area that could be pointing in any 3 Dimensional direction!

We can rotate the Point to relative to the Player, which basically means the Player is Always pointing at 0 degrees ie North. And only the Relative point moves around the player.

Here is the actual code function from our game that does this:-

The above function will then return the Relative Point vector in respect to the Players Orientation View.

Posted by RetroCoders at 13:06 No comments:

Posted by RetroCoders at 04:10 No comments: 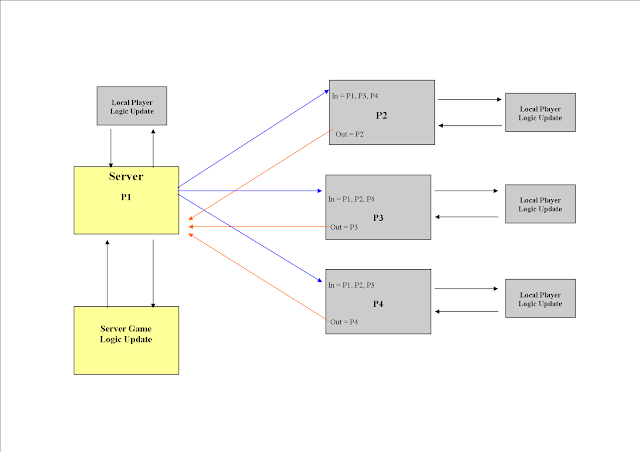 As you can see from the above diagram.  We have a Server-Client based network setup.

After trial and error and a few calculations we have decided that the above is the most efficient way for this particular game.

Each player controls his own submarine.

Each player sends their submarine data to the Server.

The Server sends it`s own and the other remaining players in the network data to each of the other players.

The Server Can choose to override Any players data if needs be, ie at Initialization and players death.

Generally the server does not update the local players data. ie Each client controls his own submarine directly.

This produces smooth controls for each of the local players.  We will then use predictive movements for all players, as viewed from each client player.

The formula for calculating the bandwidth is the following:-


Posted by RetroCoders at 15:26 No comments: